Oncovita is the owner of a disruptive virus vector technology to produce new immunotherapy treatment against cancer. Derived from the safe and highly immunogenic measles vaccine virus with clinically proven oncolytic potential, the MeasovirTM platform has a great number of advantages: not only does the virus specifically target and destroy cancer cells, but it also has the potential to elicit an effective and long-lasting anti-tumor immunity. The measles vaccine virus is naturally oncolytic with a high degree of specificity for cancer cells due to the overexpression of its entry receptor CD46 on the surface of cancer cells. CD46 is an inhibitory receptor of the complement used by cancer cells as a defense against attacks from the host immune system. The MVdeltaC virus developed by Oncovita has an increased power to induce immunogenic cancer cell death through its strong capacity to activate RIG-I, a cytosolic RNA receptor recently demonstrated as critical for responsiveness to checkpoint blockade in anticancer therapies.

Engineered viruses have proven to be powerful “bullets” to target cancer cells and to promote their immunogenic death. Oncolytic viruses are replicative viruses that preferentially infect tumor cells while preserving healthy cells. Some of them, in particular the measles virus, exhibit immuno-adjuvant properties that reinforce the antitumor immune response by breaking immune tolerance to the cancer. The potential advantages of oncovirotherapy over conventional cancer treatments include:

Measles live attenuated virus is one of the safest and most efficacious human vaccines that saves 2-3 million babies’ lives each year. The virus was attenuated in the 60s by serial passages on chicken cells giving rise to several attenuated strains among which the Schwarz strain is the most attenuated and widely used in human preventive medicine

This vaccine is given to 80 – 95% of newborns worldwide (100 million babies per year). It induces life-long protective immunity after a single dose and a booster dose is recommended. Its safety and efficacy track record has been recorded in more than 2 billion children over the last 40 years. It is manufactured with well-established processes and does not contain adjuvant. As a paramyxovirus with non-segmented negative stranded RNA genome, it benefits of a high genetic stability.

MeasovirTM has been constructed by deletion of a viral factor which normally controls apoptosis of infected cells. Its increased capacity to induce immunogenic cancer cell death is linked to its strong RIG-I agonist activity (RIG-I is a cytoplasmic RNA receptor whose activation is critical for responsiveness to checkpoint blockade in cancer). MeasovirTM platform has been patented (granted in US and Europe for treatment of all types of cancers).

In vivo activity: In vivo tumor regression by MeasovirTM treatment has been demonstrated in nude and NOD-SCID mice engrafted with several human cancer cells.

Here is shown the higher efficiency of MV-deltaC virus as compared to standard MV vaccine to eliminate tumors in an orthoptic xenograft model after a single dose treatment. NOD-SCID mice were grafted with human mesothelioma cells then treated 2 months after with a very low dose treatment administered intraperitoneally.

MVdeltaC antitumor activity was also evaluated in vivo on mesothelioma PDX model in nude mice (EPO, Berlin). Results are very positive: the treatment is active to stop tumor growth and also to reduce its size: 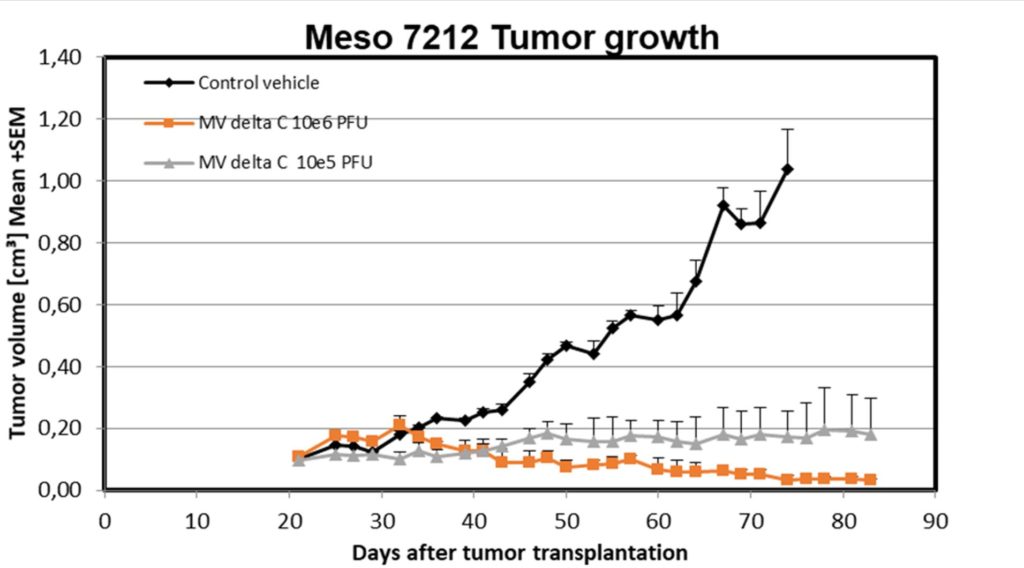 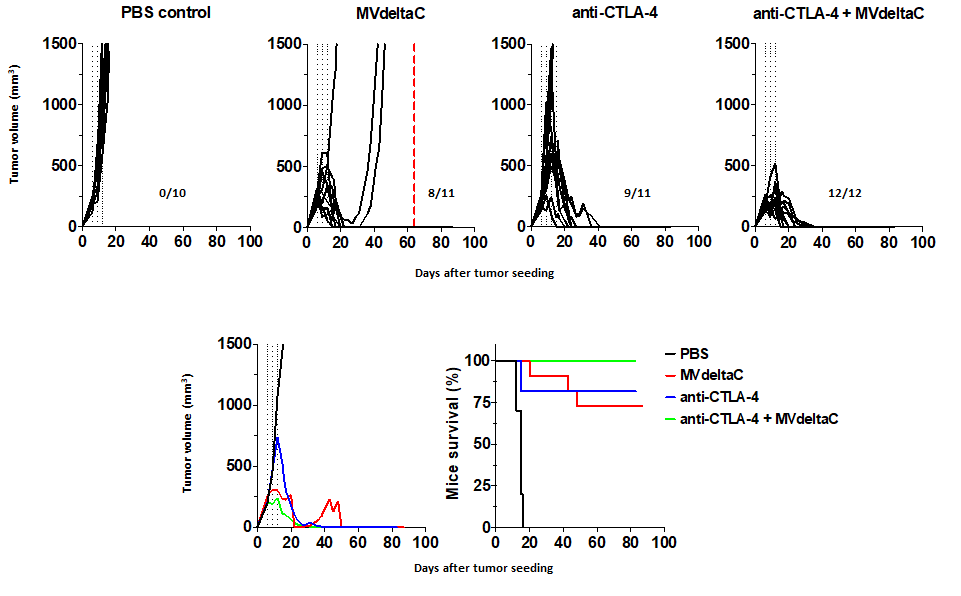 An even stronger anti-tumor activity was observed in a syngeneic model with immunocompetent mice (NS20Y tumors in A/J mice). A strong inhibition of tumor growth was observed after only 3 i.t. treatments, resulting in complete disappearance of tumors corresponding to a complete response according to RECIST criteria, associated with a high survival rate (75%).

Synergy was observed in the presence of anti-CTL-A4 antibodies resulting in a 100% survival rate.

After 3 months, the mice having eliminated the tumors were re-grafted with the same tumor cells: no tumor growth was observed, demonstrating an anti-tumor immune memory 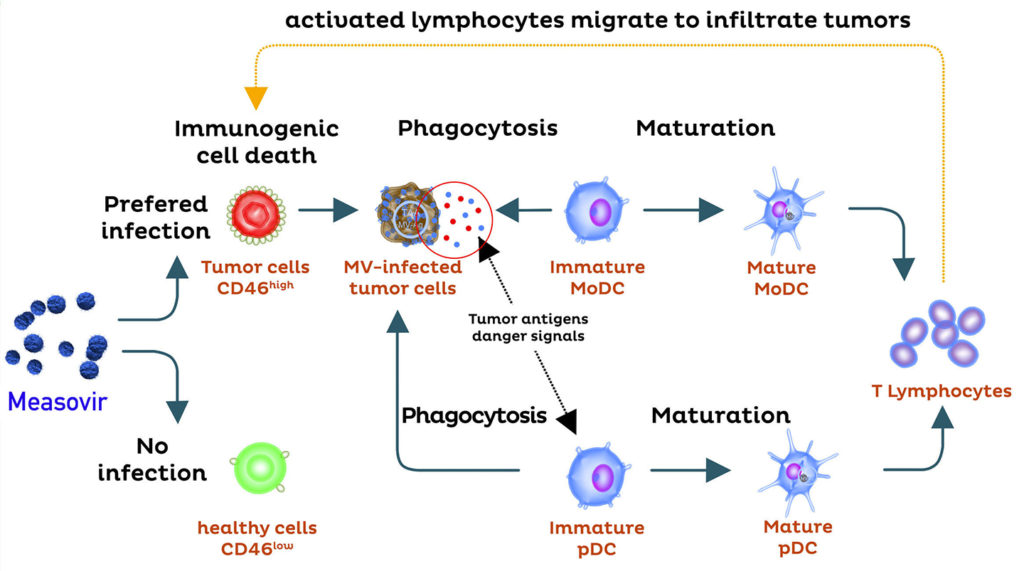 In this system, we demonstrated (i) the strong activation of both myeloid-derived and plasmacytoid-derived dendritic cells, (ii) the phagocytosis of dying cancer cells by dendritic cells, and (iii) the efficient cross presentation of specific tumor antigens to autologous T-cells. We also demonstrated the strong activation of RIG-I and cell death pathways and the production of large amounts of interferon α∫β.

All our in vitro and in vivo studies support the initiation of clinical trials to test the efficacy of MeasoVirTM against several types of tumors.
The core component of MeasovirTM – the measles vaccine virus – displays remarkably high safety records. Its industrial production is well established.

The core component of MeasovirTM has already demonstrated remarkable safety records. Its industrial production is well established and our studies support the initiation of clinical trials to test its efficacy against several types of tumors. Patients with solid or liquid tumors and with measles immune memory (90% of individuals have been vaccinated or infected) will be treated with repeated MeasovirTM administrations by intratumoral, peritumoral or systemic route. Infection kills cancer cells and activates measles immune memory in lymphoid organs. Activated immune cells (NK, CD4, CD8, B) migrate to infected cancer cells and help tumor clearance and memory establishment.
The following film illustrates the principle of this treatment.